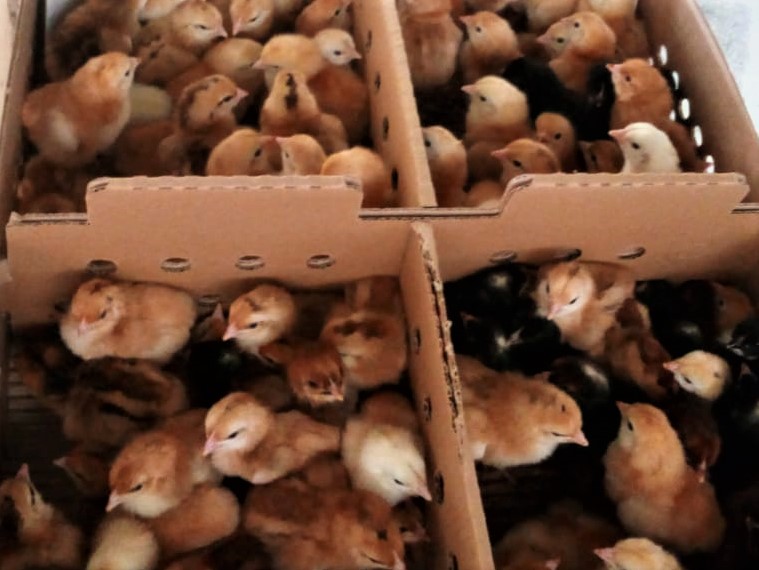 Mary Mathuli, a farmer in Wote, Makueni County has excelled in poultry farming with her farm becoming a model for others after switching from rearing kienyeji (traditional) chicken to Rainbow Rooster chicken.

Mathuli who started with 10 birds in 2016 currently has more than 1,300 chickens which she sells to farmers and a local non-governmental organization at an average of Sh270 for a month old.

She runs the farming in partnership with her husband.

Kukuchic the breeder and distributor of Kuroiler and Rainbow Rooster birds in East Africa, the breed can be reared for both meat and eggs.

“The advantage of this bird is that it is suitable for free-range with low technology input, it can feed on grass, kales, and tomatoes in addition to other commercially formulated feeds for chicken, it is also resistant to diseases such as Newcastle,” said Luka Cherop, the Sales and Marketing Manager the company.

Within three months she had increased her stock to 40 after using the five remaining kienyeji birds for brooding purposes.

For the rest of the 2016 period, she reared the birds for eggs collecting at least one crate per day which she sold at Sh350 per crate. In 2017 she secured a loan of Sh20,000 from Universal Sacco Ltd which she used to improve her production capacity.

“I used the loan to buy 50-day old chicks at Sh100 from Kukuchic Ltd and used the rest of the money to buy feeds and vaccines,” said Mathuli.

To repay the loan she used proceeds from the sale of eggs paying a deposit of Sh3,200 and six equal monthly installments.

Mathuli then timed the April festive Easter season for maximum returns due to high demand. In this, she sold all the birds at Sh700 each and bought 1,000-day old chicks at Sh100 each. “From the visits to the farm, I trained more than 100 farmers on how to handle chicks and manage the whole production process of which I was paid Sh100 per person,” she said.

In 2018 due to high demand, Mathuli increased her stock to 3,000 birds after signing a contract with FIPS Africa whereby she would rear the birds for one month then sell to the company at Sh250 for distribution to prospective farmers for free.

She also gets her market through referrals from people she trained or sold to previously.

She earns Sh4,000 weekly from eggs sale and sells at least 500 one month birds monthly at Sh270 each.

“Profits accrued from my chicken business have helped educate my two children stress-free, one is in form two and the other is in class seven,” said Mathuli.

Besides this, she bought a cow in 2017 at Sh60,000 which gives her an average of 10 liters of milk a day. The cow gave birth last year to a heifer. She consumes two liters domestically and sells the rest at Sh60 per liter. In March 2018, Mathuli bought this cow, giving birth to the heifer (left ) in September 2018 using her chicken proceeds.

Besides, Mathuli has bought three water tanks at Sh20,000 each to enable her to harvest water during the rainy season in the semi-arid region.